is a Japan-accredited 9th Degree Black Belt, and 5th generation student of Okinawan Karate with an impeccable lineage of Okinawan master instructors; starting with his teacher Kinjo Hiroshi and his teacher’s teacher, Hanashiro Chomo, Itosu Ankoh who preceded him, and his master, Matsumura Sokon Uncle to Hohan Soken), — historically the tradition’s most visible pioneer. A Canadian-born Australian migrant, McCarthy has studied the art of karate since childhood, and enjoyed an outstanding competitive background, before embarking upon a lengthy journey as a field-researcher in Japan, where he ultimately resurfaced as a best-selling author. Responsible for having developed the first academic undergraduate martial arts course anywhere in the world, McCarthy is best known for his discovery and English translation of the ancient Bubishi, of which he is regarded its leading authority.In an effort to help develop a definitive source through which to preserve, impart and gain authentic accreditation and worldwide recognition and accreditation, two of the leading authorities of the fighting arts (Hanshi Patrick McCarthy and Grandmaster Evan Pantazi), have come together to establish the Kyusho-Jutsu Kokusai Shihankai 急所術国際師範會 [International Association of Kyusho-Jutsu Master Instructors]. 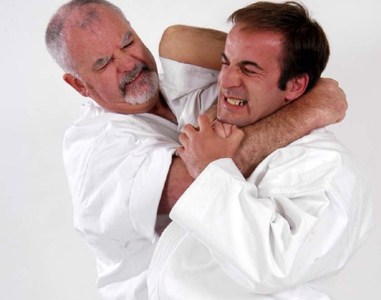 arguably the most prolific exponent of the ancient art of Kyusho-Jutsu, American martial arts authority is internationally known for his cutting-edge research, catalogue insightful books, educational DVD’s and hands-on instructional seminars. Regarded as a grandmaster he’s traveled the world many times over spreading and his contributions to the art have truly set precedence. Researching the truth of Kyusho as well as dispelling the myth and mystery that surrounds this body of knowledge, Pantazi has designed the first true international Kyusho curriculum to enable others to learn in a logical progression that achieves high degree of success in minimal time.

Together, McCarthy and Pantazi are two of the most knowledgeable and sought after instructors anywhere in the world today. With them they bring unprecedented opportunity for any and all seeking to gain worldwide recognition and accreditation in this venerable art of Kyusho Jutsu. 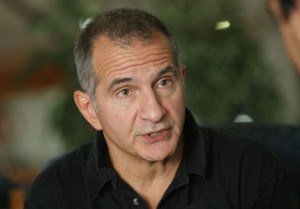 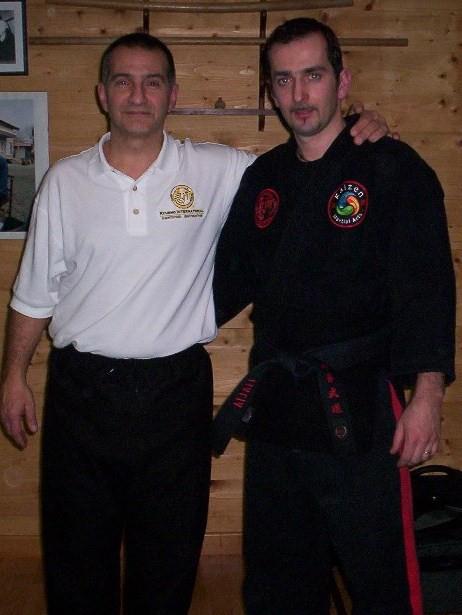 Kyusho was once revered and secret knowledge by the masters of old passing the information hidden within their style to a particular family member or one trusted student. So well-kept was this secret that the true reasons within techniques and Kata were obscured and mostly lost as the styles proliferated. Since few of the elder masters passed on this valuable body of knowledge, it eventually became thought of as myth or legend.

Since its more recent discovery, it has spread and become well known in term, yet not as much in the applied skill, nor has it yet been accepted by the majority martial artists around the world.  As this dynamic changes, more and more are not only accepting Kyusho, but also teaching this ancient skill, however as time keeps expanding the arts reach, the quality of the practitioners are for the most part stagnated and even degrading.  It is becoming diluted with inconsequential and inaccurate theories or basic premises and those with less physical acumen.

With the advent of the internet as well as the proliferation of available seminars, people rush to learn and then perform presented static tricks to publicize themselves to boost their persona. People that attend one seminar, class or simply purchase videos and books, begin to make claims that they hold a specific “Rank” or “Black Belt” in Kyusho.  Some are ranked in an art (like Karate), but the erroneously believe they have the rank in Kyusho as well, but a simple reading of their diploma will reveal they do not.

Another issue rising in prominence is passing on erroneous or insufficient knowledge is mistakenly added “other” ancient eastern traditions to compensate or attempt to explain the amazing potentials within Kyusho.  This is stated here as erroneous as all writings of the actual masters, revealing Kyusho do not involve the acupuncture terms or theories (from historical documentation), this is a modern embellishment from improper understanding. The speculation arose initially from looking to ambiguous and cryptic drawings pointing to general target locations. Greater mistakes were made in translations or the meanings of the text that accompanied these drawings. As an example let’s look at the ancient text of the Bubishi, or these more recent personal notes and drawings of Fujita and Hohan Soken respectively below: 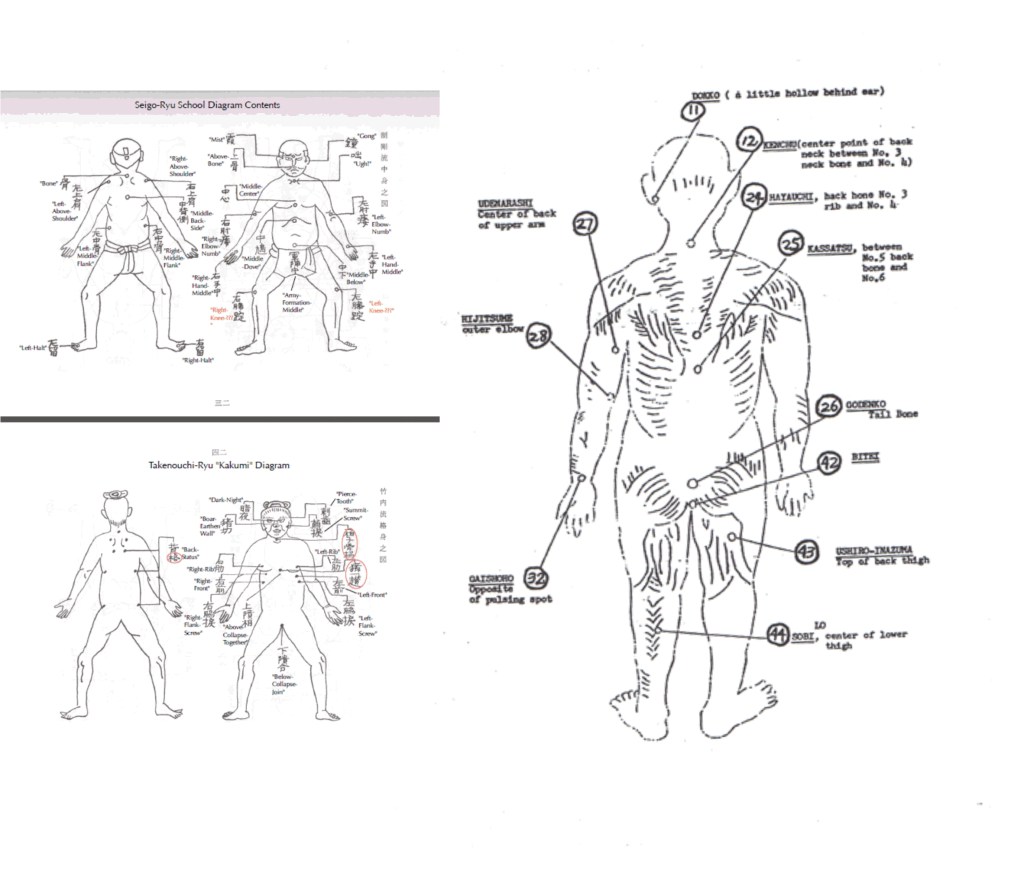 Although it is clear that the diagrams are depicting targets, when we look at the more modern translations of Fujitas drawings on the left and Sokens on the right, we see that there is no mention of acupuncture, simply named locations. Although it is easy to see how the error could have gotten started, when you look at these drawings as Eastern and match them with the Eastern practice of acupuncture, none of the associated text included supports this. In fact the actual writings are more western medical in approach.

To detail this further we can examine one such target labeled simply as “Bone” by Fujita, Keichu by Soken (and from the Bubishi as Wind Palace) – They all describe a Center point of the back of the neck (depicted in both drawings here). All three writings describe this as a Fatal target, (in Sokens the possible weapons to be used are also included) with two stating: Because of loss of both organs of sense and motor caused by the stimulation of brain nerves. There is no reference whatsoever in regard to Chi Meridians, Acupuncture or Eastern medicine. 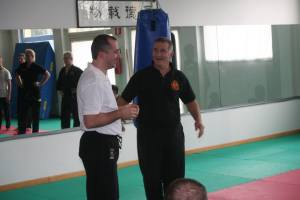 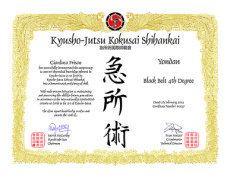 First Level: (Revival and Restoration)
Kyusho – Revival and restoration is great way to hook the more apprehensive student as it does not involve pain and taps the growing holistic health movement that is emanating throughout the world. It is also the Old Way, as people will understand this is an environment that teaches safety and proper care as the First Priority. Also by adding one Healing technique each level this will keep the main focus on safety and health as it again increases the worth of the information, this will let people know we are concerned for everyone’s well being (the concept of KI… help people grow and prosper).
Testing – The criteria will be single point restoration, and a displayed ability to revive the Head, Heart and Lungs.

Second Level: (Kyusho Mobile Arm Targeting)
Kyusho – Mobile Arm Point Manipulation assuring that everyone knows how to Strike, Rub and/or Touch points with practical mobile applications. This will also teach the correct projection of energetics into points. Any drills or methods that utilize this concept are acceptable. (From striking and grabbing motions in continuous drilling motion)
Testing – The criteria being displayed ability with all required points, used in various mobile self defense techniques within their own style, with correct Angle, Direction and Proper Dynamics.

Third Level: (Kyusho in Mobile Head Targeting)
Kyusho – Head Points in Motion coming off of Level Two skills, developing the known points with confidence and ability. (From striking and grabbing motions in continuous sparring or drilling methods)
Testing – The criteria being displayed ability with all required head points in a mobile and dynamic way, used in various mobile self defense techniques within their own style, with correct Angle, Direction and Proper Dynamics.

Fourth Level: (Kyusho in Mobile Arm, Body and Head)
Kyusho – Body Points in Motion added off Level Three. (From striking and grabbing motions in continuous sparring or drilling methods)
Testing – The criteria being, displayed ability with striking Body, Head and Arm points in a dynamic and mobile manner, used in various mobile self defense techniques within their own style, with correct Angle, Direction and Proper Dynamics.

Fifth Level: (Kyusho in Mobile Arm, Body, Head and Leg Points)
Kyusho – Leg Points in Motion added off Level Four, from Book Two developing the known points with confidence and ability.
Testing – The criteria being displayed ability with all required points, as well as extra required seminar points. Again in a dynamic and mobile method the practitioner must also either defend from all leg attacks using the specified leg points with hands and legs. Follow-up to body and head points must be included.

Sixth Level: (Kyusho in Mobile Arm, Body, Head and Leg Points adding Kyusho Take-downs)
Kyusho – Take-downs utilizing Kyusho targets in Motion added off Level Five. Developing the known points with confidence and new ability. Marketing – Budo Video 6 (More specific and up to date information on www.learn.kyusho.com ) being the source for points in this book as testing criteria, and adding one or two more required points seminar attendance or personal instruction is needed.
Testing – The criteria being displayed ability with all required points in a dynamic and mobile manner. Either from a grappled position and/or striking applications. (i.e., coming off a punch or a grab with the Arm, Body and Head adding a Kyusho Takedown used in various mobile self defense techniques within their own style, with correct Angle, Direction and Proper Dynamics.

Seventh Level: (Kyusho in Mobile Kyusho Grappling and Escapes)
Kyusho – Grappling and escapes with all Points Motion added off Level Six from developing the known points with confidence and ability.
Testing – The criteria being displayed ability with all required points in dynamic and mobile method in grappled positions as well as freestyle grappling, used in various standing or ground positions within their own style, with correct Angle, Direction and Proper Dynamics.

Eighth Level: (Kyusho in Mobile Tuite – Joint Manipulations)
Kyusho – Tuite (Joint Manipulation) with all Points Motion added off Level Eight, from all sources developing the known points and Tuite with confidence and ability.
Testing – The criteria being displayed ability with all required points in dynamic and mobile application method incorporating Kyusho enhanced Tuite.

Ninth Level: (Kyusho in Mobile Weapon Assaults)
Kyusho – Kyusho Weapon defenses with all prior Level skills used in various mobile self defense techniques within their own style, with correct Angle, Direction and Proper Dynamics.
Testing – A rigorous non-stop review of all prior levels in a stepped fashion to insure individual components are assimilated.

Tenth Level Kyusho Black Belt – 1st Dan.
Kyusho – To perform three public level 2 or 3 stage KO’s utilizing Kyusho to demonstrate the ability for real revival as well as ability to properly access the neurological system of the body under pressure and public scrutiny.
Testing, after successfully passing through the nine training levels, the final step or passage into Black Belt is this public demonstration.

For subsequent Dan ranks 2 – 9th Dan, the curriculum guide is held confidential and available to successful achievers of the prior Dan Grade.